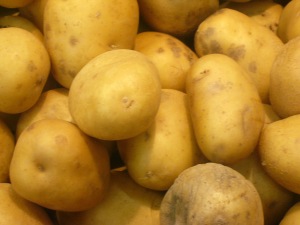 Me: That’s right.
Waitress: So no potatoes.

As the waitress jotted down “no potatoes” on her notepad, I wondered how she came to that conclusion. Perhaps the potatoes were in some gravy that was made with wheat. Or maybe… maybe she thought that “gluten-free” meant “carb-free,” since so many foods that are glutenous are foods like bread and pasta.

I proceeded with caution: “Could you ask the chef if the potatoes are gluten-free?”

I felt more confident that the chef would know what went into making the potatoes. Turns out, they were completely gluten-free. So, yes potatoes.

What is it about potatoes?

A few weeks ago, I informed another waiter that I was gluten-free. His response: “Is it an allergy?”

His question got me thinking. If he hadn’t asked, or if I had responded “no, it’s a lifestyle choice,” perhaps the chef would not have been so careful with things like cross-contamination. But I explained that my gluten-free ways were due to a medical need, and my meal was made completely gluten- and cross-contamination-free. This waiter’s question to me indicated a deeper understanding of celiac and gluten-intolerance.

What if all this time the waiters and waitresses taking my order didn’t take my gluten-free needs as seriously because I hadn’t specified that I was medically gluten-free? Was all that double-checking futile without specifying that cross-contamination is just as harmful?

The immediate answer is that if cross-contamination is an issue, it’s best to specify that when ordering food to eliminate any doubt.

The long-term answer is education and awareness. Particularly in the food service industry, it’s necessary for people to not only be aware of what gluten is, how it’s harmful, etc., but it’s also necessary to ask questions if there is something that they haven’t been made aware of. Many people with celiac disease would agree that they’d rather a server say, “I don’t know but I will find out,” than have a server say “Yes, it’s gluten-free,” when that server thinks the meal is gluten-free because there are no potatoes.

In fact, EU food information regulations state that allergen information must be available upon request for non-prepackaged food and drinks (e.g. in restaurants and bakeries). In an effort to increase understanding and awareness, including understanding unintentional allergens (e.g., cross-contamination), courses and workshops are available to food business operators, including: current and incoming rules and legislation; the effects that allergies have in the body; considerations of allergies in the factory; how allergenic ingredients should be displayed on the label; identifying allergens in example of dishes in the restaurant; and how food businesses should be providing consumers with allergen information about the non-prepacked food they serve.

It’s understandable that without being told that cross-contamination, for example, can be harmful to celiacs, a waiter or waitress might not know to disclose that information. By providing those in the food service industry with allergen education, the EU is potentially making un-prepackaged food and drinks safer to consume for those suffering from celiac.

How ’bout them potatoes.