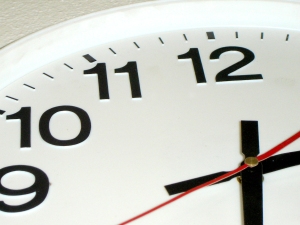 Though not everyone is given the same amount of days, everyone is given the same amount of time in a day. It might seem as though most people have just enough time in the day to not complete everything on their to-do list. Have you ever paused to consider someone—your toddler in one arm, your vacuum in the other, and dinner roasting away in the oven—and wondered, “How does she do it all?”

Time management is a widely considered topic, which is not surprising given these days of 24/7 global communication and instant gratification. There exists plenty of advice on how you can better manage your time, how you can make yourself more productive in shorter periods of time, how you can break the habit of “multitasking” and complete one task at a time to actually make progress.

What’s less considered when thinking about how you can better manage your time is how other people can affect your schedule—or even how their perception of your schedule can influence the way you perceive your own level of busy.

There are two ways that meetings can become an inefficient use of time before they even begin. The person with whom you are meeting could arrive late, or could cancel the meeting altogether.

It is understandable in some cases when a person arrives a few minutes late to a meeting. Don’t necessarily expect it, but budget for it. If you are like me, you always try to arrive to meetings with at least ten minutes to spare. This means if someone is even five minutes late, you might wind up waiting fifteen minutes for a meeting to actually begin.

I’ve heard many people say, “I wish I had more time to read…” but I know those same people to sit in cafés at times waiting for their friends/colleagues/etc. to arrive, staring blankly at their phones not because there is something interesting on the screen, but simply because they are sitting alone. Swap those fifteen uncomfortable minutes of pretending there are important things on that phone for fifteen minutes of reading.

If you don’t want those fifteen minutes of waiting to turn into thirty and beyond, confirm the meeting the day before. I once set up a meeting a week in advance and confirmed the day before. The person with whom I was scheduled to meet responded to my confirmation that she thought I had cancelled the meeting. She had mixed up her contacts—another one of her meetings had been cancelled and she thought it was ours. If I hadn’t sent the confirmation, I would have been waiting for a meeting that would never begin.

About meetings that will never begin…

Some meetings will inevitably be cancelled. There are those that are cancelled well in advance, and those that are cancelled after you’re already on your way. They are both time-consuming. Oftentimes there is an understandable reason for cancelling a meeting. You might even do it yourself. Some other times you might find that you sent a confirmation email only to have the meeting cancelled in the reply (and what would have happened if you hadn’t sent the confirmation email? Perhaps it would have been cancelled even later…when you were already on your way.) Still other times you might find yourself in the middle of rescheduling a meeting (you’ve found a mutually agreeable date and time…it’s just a matter of place) when the other party simply stops responding.

The mysteries of what causes these things to happen may never be known. It may just be that some have a more casual relationship with time.

But time is a nonrenewable resource for individuals regardless of its inherent infinity.

A cancelled meeting could mean that suddenly there is a block of open time in your schedule. You understand the value of your time, and this might seem like a good thing. But you could have so much on your plate that you become paralyzed not knowing what to attack first, not wanting to waste your extra hour. Don’t dwell on how much time you spent preparing for your cancelled meeting—instead focus on the time that you have at that very moment. After all, time that has passed is fixed in a state of non-existence and therefore cannot be changed. Take one minute to readjust, pick a task, and do it. It truly doesn’t matter what it is; anything that you accomplish in that time is a better use than letting it slip away.

Another phrase I’ve heard a lot is, “You’re so busy,” or, “You probably don’t have time, but…” The strange thing about these phrases is that whenever they are directed toward me, I always feel that while they could be true, they are not necessarily true. If something is important, there is time for it.

Time is fixed. The hours on our clocks do not change. There are 24 in each day. Assume I automatically subtract 8 from those 24 for sleep, because sleep is not optional. I am left with 16 hours every day to be awake and productive. If hours are fixed, we are left with variables that we assign to each of those 16 hours. Those variables could be Eat, Read, Family, Work, Leisure, Tennis, Study, Guitar, etc. Variables will change for everyone, depending on what’s important/necessary in their life. Notice, however, that I classify neither Read nor Guitar as Leisure. They are their own variables. If they are important, they must be assigned a time. Otherwise, Leisure from 12pm-1pm could quickly turn into TV watching rather than the intended guitar practice, and you’ll find yourself down the ever-shortening line of time ahead of you wondering when you stopped playing guitar.

So when someone says to you, “You probably don’t have time to direct this film…” (or meet for coffee, or become a Certified Pilates Teacher), that may seem true at first. But because you are the puppeteer of the variables that fill your fixed 16 waking hours, if directing that film is important, it becomes the variable Direct, and it must be assigned the appropriate slots. Other variables will shift, but that’s why they’re variables and not fixed. They are flexible in their placement, but not in their existence.

Variables as discussed here are like rubber bands. If a variable has been assigned to a fixed time slot and must be replaced, the further away from that original time slot you move that variable, the more tension in the band. It can only be moved so far away from the original slot (days, weeks, months) before it snaps. A snapped band implies that variable is no longer important.

If someone posits that you might be too busy to do something that you deem important, it might be tempting to agree. But in reality, their perception of your busyness has little to do with how you manage your fixed hours and variables.

Assume that you have 16 waking hours to complete 8 variables: Eat, Family, Guitar, Leisure, Read, Study, Tennis, Work. (I am assuming here that you wish for each of these things to be completed every day. If different days of the week have different variables, create a spread, as shown below, for each day of the week. You can also create spreads for a week or a month, depending on how variable your variables are.)

Because the 16 hours are fixed, they are in a fixed line above. Each slot represents one hour. The variables are represented by the first letter of the activity to be completed. You can figure out the assignments of each variable to the 16 slots using a series of conditional statements, or rules, that you determine to be true.

Assume each variable requires either 30 minutes or 1 hour to complete, except W, which takes 8; E, which takes 2; and F, which takes 2. That leaves 4 hours for G, L, R, S, and T. Because there are 4 hours left to do five things, two of those things must be 30-minute tasks. You might determine a rule to be: If I play tennis for one hour, I do not eat in the hour that immediately follows. If you assign the first slot to Tennis, then Eat cannot occupy the second slot.

Depending on the travel time required for each of these tasks, you may need to add another variable, C (commute) and adjust the rules of your spread.

With a spread like this, “busy” has no place. You do not need to eat and study at the same time (create a rule that says Eat and Study cannot take up the same time on your spread), which can lead to cold food, sauce-stained books, and the feeling of time pressure. You do not need to panic that you haven’t spent enough time with your family—you will know exactly how much time you spent with your family (and it might be more than you give yourself credit for, Guilty Gil).

With this more formal relationship with time, you won’t find your hours slipping by unnoticed. You will know where you are in space at designated times, and any variation of dealing in some way with a meeting (attending a meeting, having a meeting cancelled, waiting for a meeting to begin), or other variable whose fixity is largely dependent upon others, won’t hemorrhage into your future time slots, causing a massive temporal clean-up and readjustment of variables. No one has time for that.